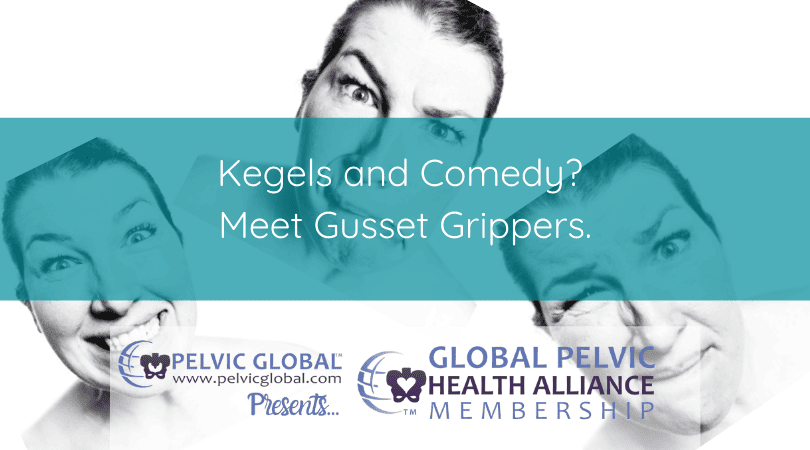 Who is Elaine Miller,

Usually, discussing matters of urinary incontinence and pelvic organ prolapse is NO laughing matter. However, there’s a fabulous, hilarious physiotherapist in the UK (Edinburgh, Scotland) who’s found a unique way to bring these topics to the comedy stage with grace. Her timing and comedic knack are special qualities; and so is her ability to educate about very important pelvic health topics at the same time. She is one of a kind. Who is this crusading comedienne in Scotland? Her name is Elaine Miller, also known as Gusset Grippers or Gussie Grips.

“I brought you a pelvic floor to look at. Truth be told I brought two, but you are only seeing one”

Now, THIS is a way to decrease embarrassment about these important topics.

How Was Gusset Grippers Discovered?

“I tweet you twitch your twinkle” – Twitter motto to educate about the pelvic floor. Many of us discovered “Gussie” on Twitter.  She is a regular contributor to the #pelvicmafia tweets on Twitter (great way to find other pelvic PTs and pelvic health professionals). She has a way of bringing humor to any and all pelvic health topics. Here’s a peak:

Now wondering about mermaids' pelvic floors. Fish don't have one. Princesses do. I think it's best to #doyerblardyexercises just incase

“Kegel” Tupperware party, anyone? On her website she informs: “The chat lasts an hour, £10 a head which includes coffee, cake and the chat/advice/laugh.  Supply your own clench.”

My Interview with Elaine:

1. Tell me about you – professionally and personally.
So, my background’s in sports, but, I’m training to become a pelvic physio.   My interest in continence  started because I was left more than a little leaky after having my kids.  It really amazed me that three wee exercises could change my life.  Wish I’d done them earlier…
I do see patients, I’m self-employed.  But, it’s very small – my three kids don’t seem to be self-managing yet.
The parties were designed really to trial the comedy.  I was sure that an irreverent approach would work, and they gave me the confidence to try the Fringe show.  They are good fun, women are initially very quiet and then, once they realize I’m not going to pick on them or ask them any questions, they relax and get really quite ribald!
The comedy only works because the joke is always on me. I turn myself into a caricature of a woman living with incontinence, pain, and prolapse.  It’s ludicrous to think that I could possibly have experience of ALL the conditions, but, I’ve used anecdotes from patients as tools to illustrate the problems and solutions.  There’s humor in everything.
The men like it, I was surprised by that.  There’s not a man on the face of the planet who’s not interested in being “stronger for longer” and they are, generally speaking, even less aware of pelvic floors than women are.  I like men, I get on with blokes, and, that seems to come through on stage – female comedians have a (slightly unfair) reputation of being unkind to men, but, I seem to be able to get them to warm to me.  Probably talking about their willies helps that.
I live in deepest darkest suburbia in Edinburgh, you can see the castle from the end of my road.
I’m married to Stevie and we have three kids (10, 8, 6) and an ever-increasing menagerie.  Stevie’s very supportive of my comedy, but, wearies of me “going on about vaginas” to anyone and everyone.  Seems I’m a little disinhibited. Oh well.
2. How did you get involved in the comedy tour and what comedy shows have you done?
I got into comedy by accident.  There was a bunch of us at the school gate, all turning 40, and we set “bucket list” goals.  One was going to run a marathon, one was going to finish her degree, one was going to get divorced (!) and I didn’t fancy any of those options at all.  But, when I was in my 20s I was telling a story at a party about a really dreadful date I’d been on the night before, it was so bad it was funny.  Someone there ran the Comedy Store in London, and he offered me 5 mins on stage.  Naturally, I refused.  And, so I’ve spent 20 years watching comedy thinking “I could do that”.  So, I did.  I entered a “newcomers competition”, naively not realizing that you are supposed to be Quite Good in order to enter a competition.  And, I got through a couple of rounds, and, really loved it.
I’ve performed at most of the comedy clubs in Scotland.  Last year I did a run at the Edinburgh Festival Fringe with “Gusset Grippers” which was stand up about pelvic floors and continence.  It was awarded “Weirdest show of the Fringe” which is, apparently, a compliment.  Reviewers liked it, comedians liked it, professional peers liked it, but, most importantly, the audience liked it.  Bit of a relief, really.
I like the straight stand up, my stuff’s mostly about living with young kids and the exasperations that come with being married to someone that you love dearly, but, who bemuses you most days.
3. What’s your ultimate goal?
To break down the taboo that surrounds incontinence.  It really bothers me that women are too embarrassed to seek help.  Living with less bladder control than your toddler has won’t kill you, but, it does interfere with every single thing that you want to do.  Women are disempowered by this condition and I don’t understand why we put up with it, especially when most cases of simple stress incontinence are completely curable with exercise and basic lifestyle changes.
So, I’m writing a book, imaginatively entitled “Gusset Grippers”.  It’s like the show, evidence-based practice disguised as scatological humor.

“I truly believe that comedy is the way to evangelise about pelvic floor exercises.  If you can make them laugh, they’ll talk, if they talk they can get educated.”

Menstruation was embarrassing 30 years ago.  We now have adverts on the telly and girls are no longer taught to be ashamed by their normal bodily functions in sex ed classes.  I’d like to do the same for incontinence.  It’s so common, every woman understands or has had personal experience, so, there’s no need to be trapped by shame and miserable.
I’d REALLY like to get our government to listen to me.  They waste so much money by not managing incontinence.  I’d like to get them to force continence pad manufacturers to put health promotion information on the packaging, they are making huge profits out of people’s misery and I think they should be obliged to print basic information on every pack of pads.  Anything that prompts people to seek help is a good thing, and, if you saw #doyerblardyexercises printed on every incontinence pad, well, it’d improve compliance.
I’d like to see articles about incontinence in the media.  Not just in pregnancy magazines, but, in running forums, fashion articles and the Sunday Supplements.  It’s not a thing to be ashamed of, and it’s not a thing to put up with <gavel>
AND, I’d like to get medics understanding that most of these people can be self-managing or cured with simple education.  There’s really no need for gynecologists to be snowed under with so many prolapses, or for the endless number of TVT surgeries.
Women want a “quick fix”.  That’s our fault.  If the evidence says that 1:3 women are incontinent and 70-80% of that is curable, then we need physios helping these women!
Why isn’t incontinence discussed on orthopedic wards?  Why is it acceptable that elderly people in residential care are padded up rather than toileted regularly?  Why is most of the focus on continence around maternity services and not in schools – if we teach 16-year-old kids what the exercises are, and that they improve your sex life and that you should do them when you brush your teeth, well, the randy wee rascals will do them!  And, who knows what effect that could have on their pelvic floors once they get into their 50s and beyond.
Sorry, I know I’m preaching to the converted.  I’ll just hop off my soapbox.

Who wants to see Gussie Grips on tour? Let’s bring her comedy all over the world!!

If you loved what you saw, please write a comment (and share this link with others) in support of Elaine (Gusset Grippers)! Do you want to nominate anyone for the next Pelvic Professional Spotlight?

If yes, who and why? (This can be a physician, physical therapist, fitness professional, midwife, sex therapist and more!) 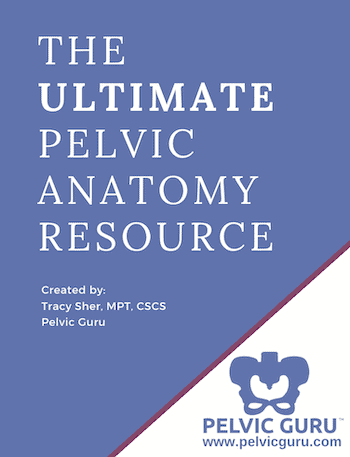 What IS Pelvic Physical Therapy and Why Doesn’t EVERYONE Know About It?

This site uses cookies – small text files that are placed on your machine to help the site provide a better user experience. In general, cookies are used to retain user preferences, store information for things like shopping carts, and provide anonymised tracking data to third party applications like Google Analytics. As a rule, cookies will make your browsing experience better. However, you may prefer to disable cookies on this site and on others. The most effective way to do this is to disable cookies in your browser. We suggest consulting the Help section of your browser or taking a look at the About Cookies website which offers guidance for all modern browsers

Change Location
Find awesome listings near you!
Skip to content

This website uses cookies so that we can provide you with the best user experience possible. Cookie information is stored in your browser and performs functions such as recognising you when you return to our website and helping our team to understand which sections of the website you find most interesting and useful.

Strictly Necessary Cookie should be enabled at all times so that we can save your preferences for cookie settings.

If you disable this cookie, we will not be able to save your preferences. This means that every time you visit this website you will need to enable or disable cookies again.